The College (Valley Art) Theatre was constructed in 1938 by Dwight "Red" Harkins. This was Harkins' third theater in Tempe. He opened his first theater, the State Theater, in 1933 on Fifth Street. In 1934 Harkins started an outdoor theater in Tempe Beach Park, which operated for one summer only. The College Theater was a successful expansion of Harkins' theater operations in 1938. Later, Harkins and his son, Dan Harkins, expanded their theater operations across the Salt River Valley. The building is importantly associated with Depression-era business in Tempe. Entertainment was one of the few areas that were economically successful during the Depression.  This building is significant as the only Depression-era theater constructed in Tempe. Virtually intact, it provides a positive contribution to the historic character of the streetscape along Mill Avenue. Character-defining elements include the wood frame movie poster cases and freestanding ticket booth. Due to its historic significance and high degree of integrity, it would be considered individually eligible to the National Register.  At the turn of the century Dan Harkins undertook an historically sensitive restoration of the theatre to honor his father’s life work thereby cementing his legacy in time and history. The theatre historically representative of the late depression era remains as “Red’s” living monument. Modifications to the screen size and location were carefully considered so as to maintain the historic accuracy of the auditorium and the period theater-going experience. The restored theater showcases original features including wall sconces and paneling and maintains original circulation and layout configurations. Overall attention to detail and respect for historic integrity created a meaningful restoration of this very significant theatre. 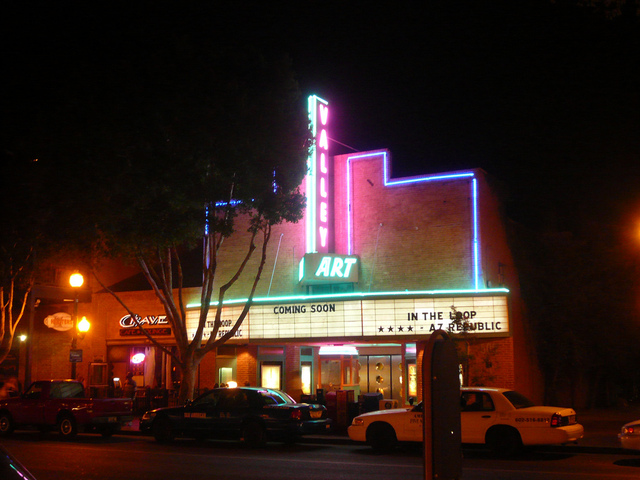