Tempe Streetcar will serve one of the highest transit ridership centers in the region and will connect riders to neighborhoods, major business centers and regional events and destinations (like Downtown Tempe!). Streetcar chronicles is a brief glimpse at the people, places, and spaces involved with building the Tempe Streetcar in Downtown Tempe. 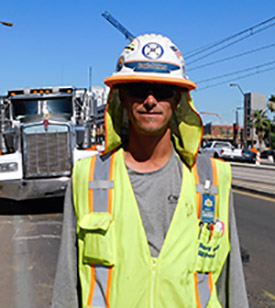 Travis Pettera has been in construction for 20 years. He takes pride in his work and he's been involved in 5 different Valley Metro rail projects. When he's not working on the Tempe Streetcar project, he loves playing ice hockey. 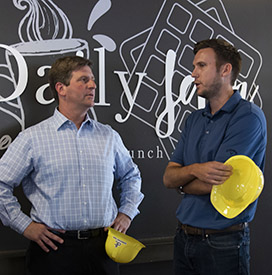 U.S. Representative Greg Stanton paid a visit to downtown Tempe on Hard Hat Thursday last week. After picking up his hard hat at DTA, he visited with local business owners including Berekk Blackwell from Daily Jam (home of the Best Waffles in Arizona according to the Food Network) and Mark Rogers and Jarrod Bailey from Escape Zone. 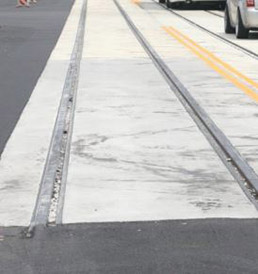 For the Tempe Streetcar project, approximately 16,000 tons of asphalt will be placed. That's 32 million pounds of asphalt.

African elephants weigh 6 tons on average. The amount of asphalt that will be poured is equal to 2,667 elephants! 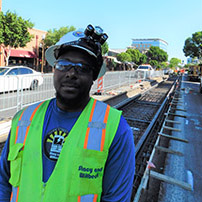 Sam Barlow has been working in construction for 5 years. When asked about an interesting fact that he wants people to know about the streetcar project, he said before the concrete sets in the railroad tracks, it can actually shift as they are working so you have to continue to check measurements between the rails. For fun, when he's not working, he spends time with his wife as she spends all his hard-earned money. :-) 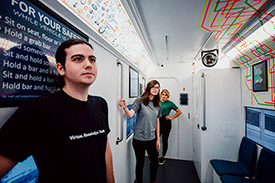 Nine downtown Tempe merchants got together (Escape Zone, Daily Jam, Snakes & Lattes, Spinelli's Pizza, Lotions & Potions, Cactus Sports, 414 Pub &Pizza, Candy Addict, The Flow Shop) to create the Local Business Streetcar Tour at the Escape Zone on Mill Avenue. While spending time in the Rush Hour escape room (yes, it's a train!), visitors will be able to explore the local businesses along the new streetcar route. Whether you escape the room or not, you'll receive a prize package valued at over $30! Book your group tour, offered daily from 10 am - 10 pm through August 15. 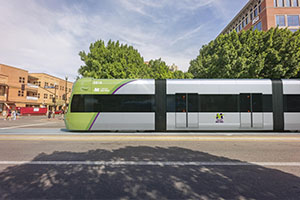 What's the difference between the streetcar and light rail? Modern streetcars are different than the light rail.

In less than 30 days, construction crews poured 875 cubic yards of concrete and installed 9,500 feet of conduit on Mill Avenue.

How much concrete is that? 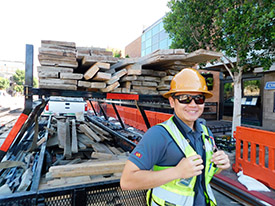 Jay Nguyen has been working in construction for three years and works to make sure the streetcar construction site is safe for all workers and the environment in general. His safety skills such as his knowledge of CPR & First Aid help him in his day-to-day life. They come in handy because in his spare time, he enjoys fishing, fitness and is a big foodie. 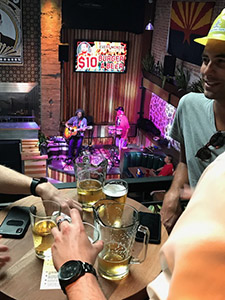 Tempe Young Professionals got into the groove for Hard Hat Thursday in June by holding their monthly networking mixer on Thursday, June 20 at Trumbull's Tempe on Mill Avenue and listening to Tempe music icon, Walt Richardson.

What's the difference between the streetcar and light rail? Modern streetcars are different than the light rail.

There will be 14 sheltered stops along the 3 mile route with 2 light rail connections, one at 3rd & Mill and the other at Dorsey Lane. Each stop will feature public art to reflect the surrounding neighborhood. The streetcar vehicle will stop at each stop for passenger drop-off/pick-up, but the time at the stop will be a much shorter time period (+/- 30 seconds) than the light rail train takes at the light rail station. There will be a total of 7 stops in the downtown district.

The streetcar will be powered entirely by battery power as it moves northbound up Mill Avenue between University Drive and Rio Salado Parkway. 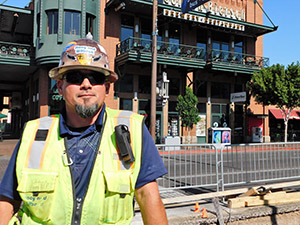 Trae has been in the construction industry for 15 years. As a project superintendent, he oversees every facet of the work including supervising over 100 craft people, controlling and maintaining the project schedule, all while troubleshooting and resolving issues as they occur. When he's not out working on Mill Avenue, he hits the trails in his side-by-side or spends quiet time by the pool. 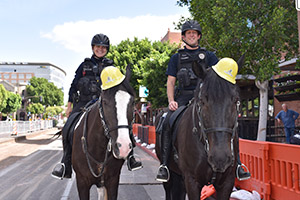 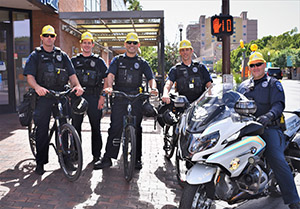 When we asked the Tempe Police Department to help us out with photos to promote Hard Hat Thursdays, they responded in full force early one morning. Not only did members of the downtown Bike Patrol volunteer, they were joined by motorcycle patrol and mounted units. Meet LEO on the left (short for Law Enforcement Officer, named by the Tempe community) and on the right, Titan. LEO's hard hat required cutting a hole for his ear while Titan preferred the jaunty "balance between my ears" fashion-forward approach.

What's the difference between the streetcar and light rail? Modern streetcars are different than the light rail. Lesson 2 - The Vehicle:

Streetcar vehicles are smaller than light rail vehicles and operate individually, not linked together like a train.

The Tempe Streetcar vehicles are being built by Brookville Equipment Corporation. Brookville is a Pennsylvania-based transportation vehicle manufacturer and are the only maker of streetcars to design and manufacture exclusively in the United States.

One streetcar vehicle will be able to accommodate approximately 125 passengers. 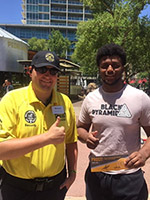 Random acts of kindness happen every day on the streets of downtown Tempe. The Safety Patrol, Ground Support and Parking Compliance Teams are handing out gift cards to unsuspecting guests on the street to thank them for supporting downtown businesses during the summer streetcar construction. 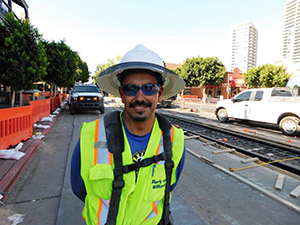 Mario knows concrete. He ought to - he's been in the construction industry for 25 years. He focuses on being accurate and professional as he works his crew to set and pour the rail track for the streetcar. When he's not working on the streetcar project, he enjoys family time, fishing, reading and helping the less fortunate.

We want people to get a chuckle as they walk on the sidewalks past the construction area(s), so every day we place funny signage out on the sidewalks in downtown. Here's a sample (go ahead and laugh). 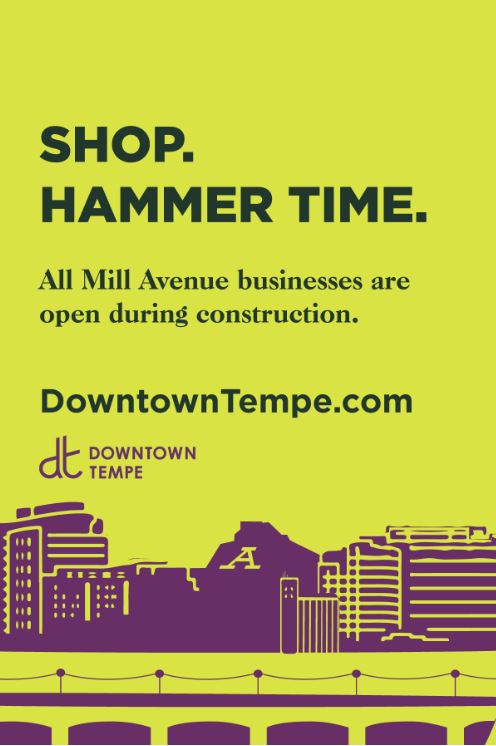 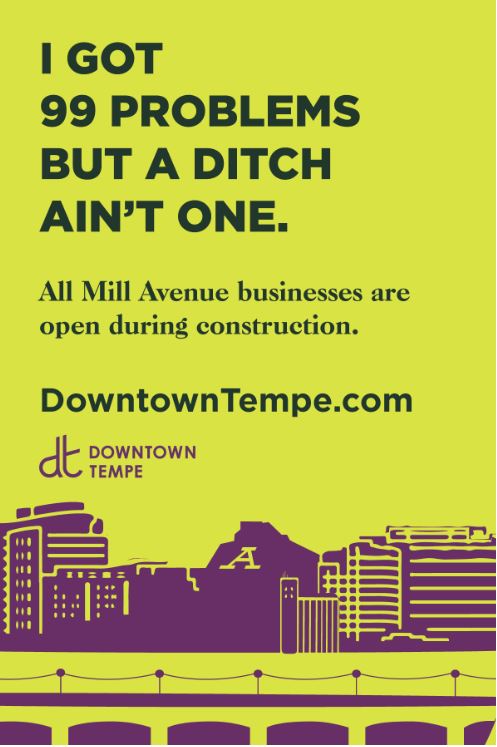 What's the difference between the streetcar and light rail? Modern streetcars are different than the light rail. Lesson 1 - Learn the Lingo:

Call it a streetcar, not a train.

It has operators, not drivers.

Follow @DowntownTempe on Instagram for a chance to win gift cards from participating merchants every week. And the free parking. Did we mention free parking?!