What's a pasty?  Glad you asked!

The Cornish Pasty originates from Cornwall (Southwest England) and can be traced back as far as the 1200’s. Mining was once a thriving industry in Cornwall and at that time pasties were baked by the wives and mothers of the tin miners. Pasties were made with a thick crimped edge along one side so the miners could use the crimp as a handle to hold on to while eating. The miners hand would often be covered in arsenic from the mine, so the miners would discard the handle when they were done. The crusts were never wasted though, as many miners believed that ghosts, or ‘knockers’, inhabited the mines, and the leftover crusts would keep these ghosts content. Traditionally, pasties were made with different fillings at each end. One end containing meat and vegetables, and one end with a sweet filling. The sweet end would be marked with an initial so the miners knew what side to eat first. Today, Cornish pasties are filled with steak, potatoes, swede (rutabaga) and onions. At one time Cornwall had nearly 2000 flourishing tin mines, but by the 1880’s tin mining had become a rapidly declining industry. At this time, Cornish miners began emigrating to Michigan’s Upper Peninsular for copper mining bringing pasties with them.

Check out the Menu 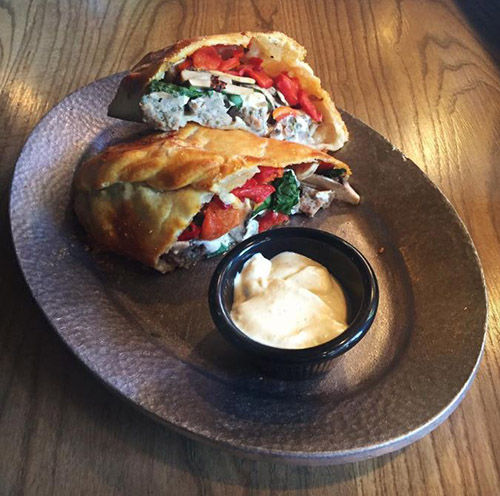