Dr. Benjamin B. Moeur, a physician from Tennessee, came to Tempe in 1896 and became the town's only full-time physician. Doctor Moeur’s successful medical practice was augmented by his involvement in several profitable business ventures in Tempe. He was president of the Southside Electric and Gas Company and part-owner of the Moeur-Pafford Company cattle operation (in partnership with his brother-in-law J.K. Pafford). In 1906 he partnered with M.E. Curry and George L. Compton to found the Tempe Hardware Company at 520 S. Mill Avenue, and at one time he also owned the Broadway Moeur Drug Store. Always interested in education, Moeur served eight years on the Tempe School board and twelve years on the Tempe Normal School’s board of education. In 1912 Moeur combined his interest in education and politics by serving as a delegate to the Arizona Constitutional Convention, acting as chairman of the education committee.

In 1896, Dr. Moeur purchased the property and moved his family into the house at the corner of Myrtle and 7th Street. Many years later, when he served two terms as governor of Arizona, he still lived in this house in Tempe. The B. B. Moeur House was originally a simple two-room frame cottage built in 1893 which was expanded over a 40-year period to a large, prestigious home of 2,800 square feet that represents a unique evolution of additions, modifications, and stylistic interpretations. Moeur began the additions and changes in 1901. The current appearance of the house shows major changes that were made in 1912, which gave the house a more formal appearance representing the then popular Neo-Colonial Revival Style that is of architectural significance today. 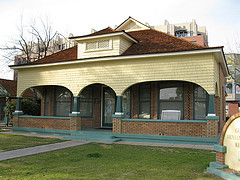