Have you ever heard of an “escape room” or an “escape game experience”? If you haven’t, it involves a group of people getting locked into a room, usually themed around horror or fantasy, and the team must solve a series of puzzles in order to get out.

Sounds interesting, right? If you want to jump into one of these mystery-solving adventures, check out Escape Zone, the new escape game experience in Downtown Tempe!

A group of us from the office were really curious as to how this whole experience worked, so we decided to test our mystery-solving skills together.

As we walked to Escape Zone, we talked about our assumptions of the game. Basically, we were all really nervous because we were sure that we were going to be thrown into a dark basement where really creepy horror movie things were bound to happen.

When we arrived, Mark, the owner, welcomed us in. I think he sensed our fear as he sat with us in the lobby to go over the details of what exactly we were getting ourselves into. 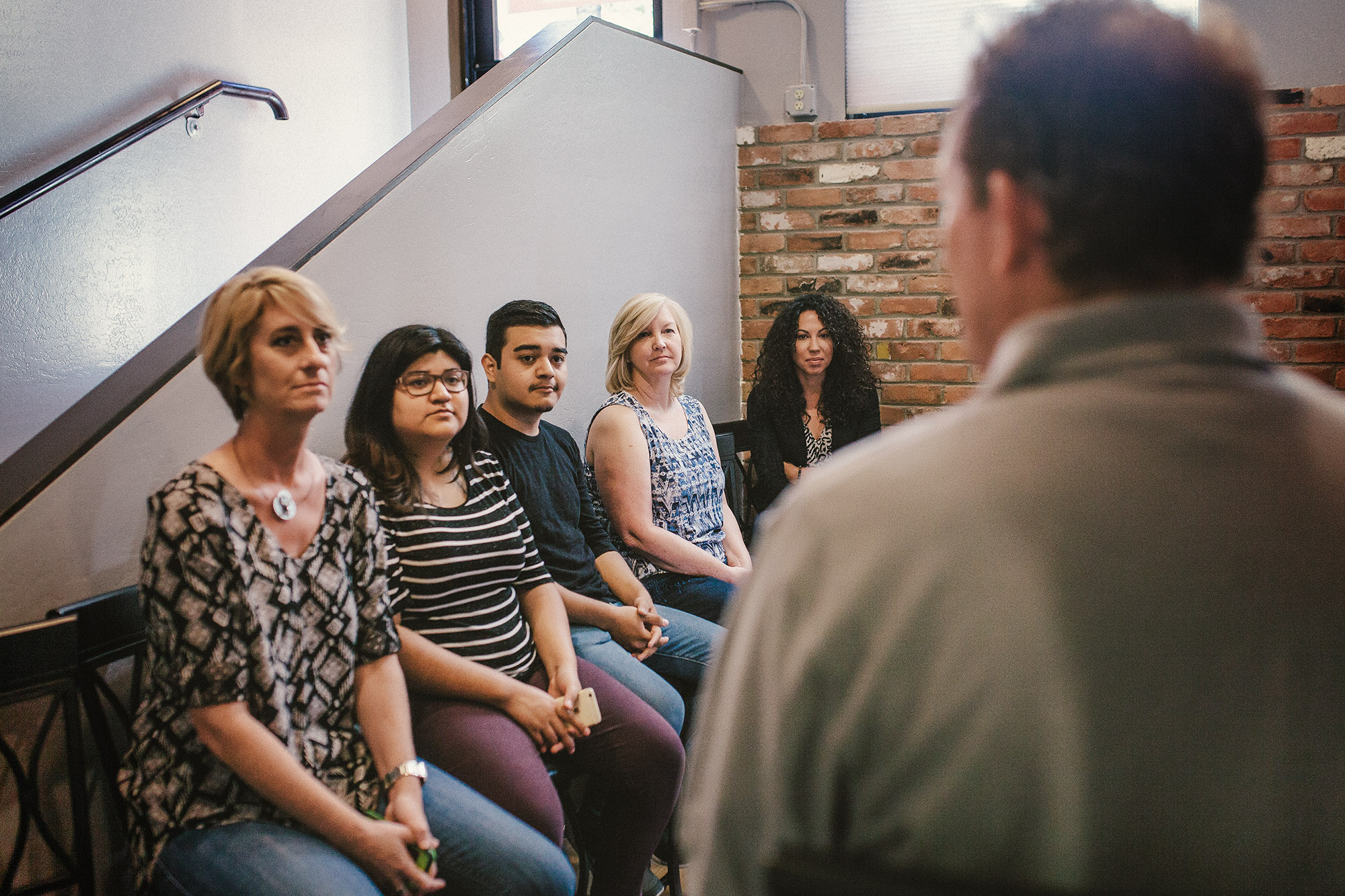 Mark gave us the run down on our game scenario; we were unrightfully thrown in jail while visiting Central America, and our only hope of survival was to escape while the guard away for lunch. If we didn’t find a way to escape in one hour, we were doomed.

With a mix of excitement and horror, we were ready to take on this jailbreak challenge. Mark asked us to split up into two teams. We tried to divvy up so that we could have a good mix of street smarts and general wisdom in each group, ha! It didn't really matter, however, since we were all working together as one team. 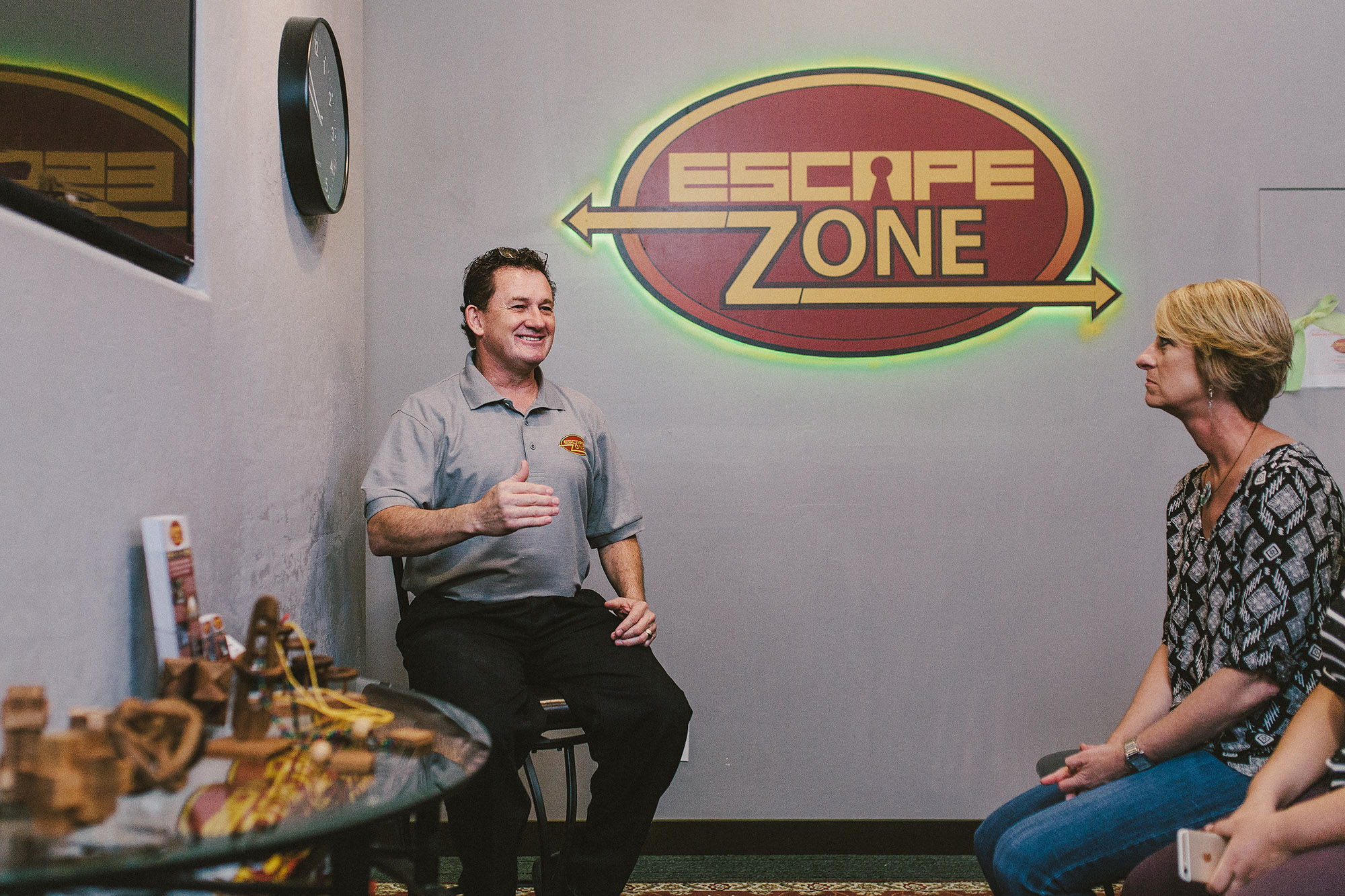 Mark led us down the hall and opened the door… it was as if we were transported into an intricate prison movie scene. There were two jail cells, a guard desk, and a slew of other objects that you would imagine would be in a jail scene. It all looked so real! We were giggling until Mark pulled out the handcuffs and then we quickly became concerned.

Cuffed up into two groups of three, we were locked inside of our cells. Mark let us know that we had one hour to escape, wished us luck, and walked out of the jail – closing (and locking) the door behind him. 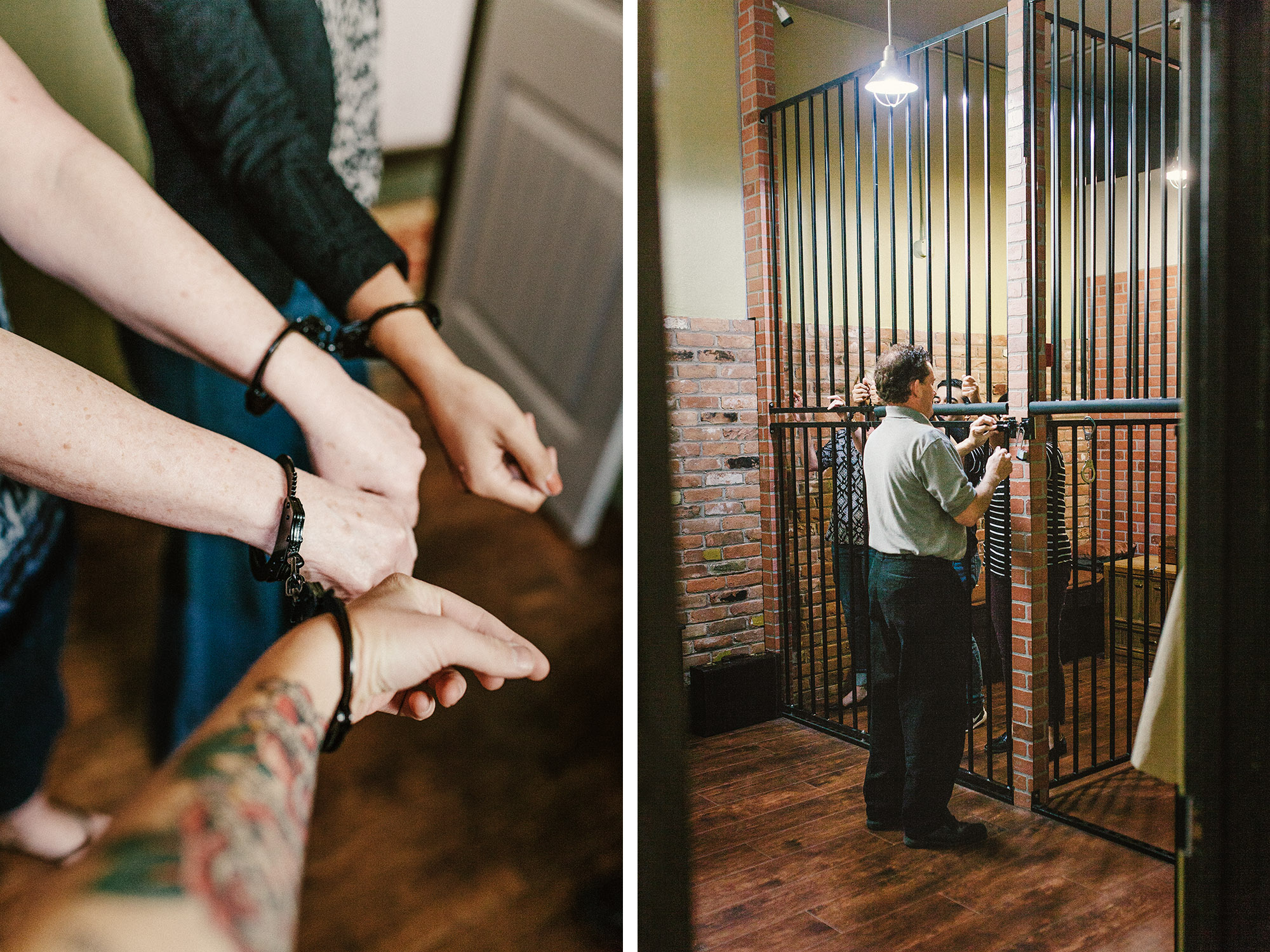 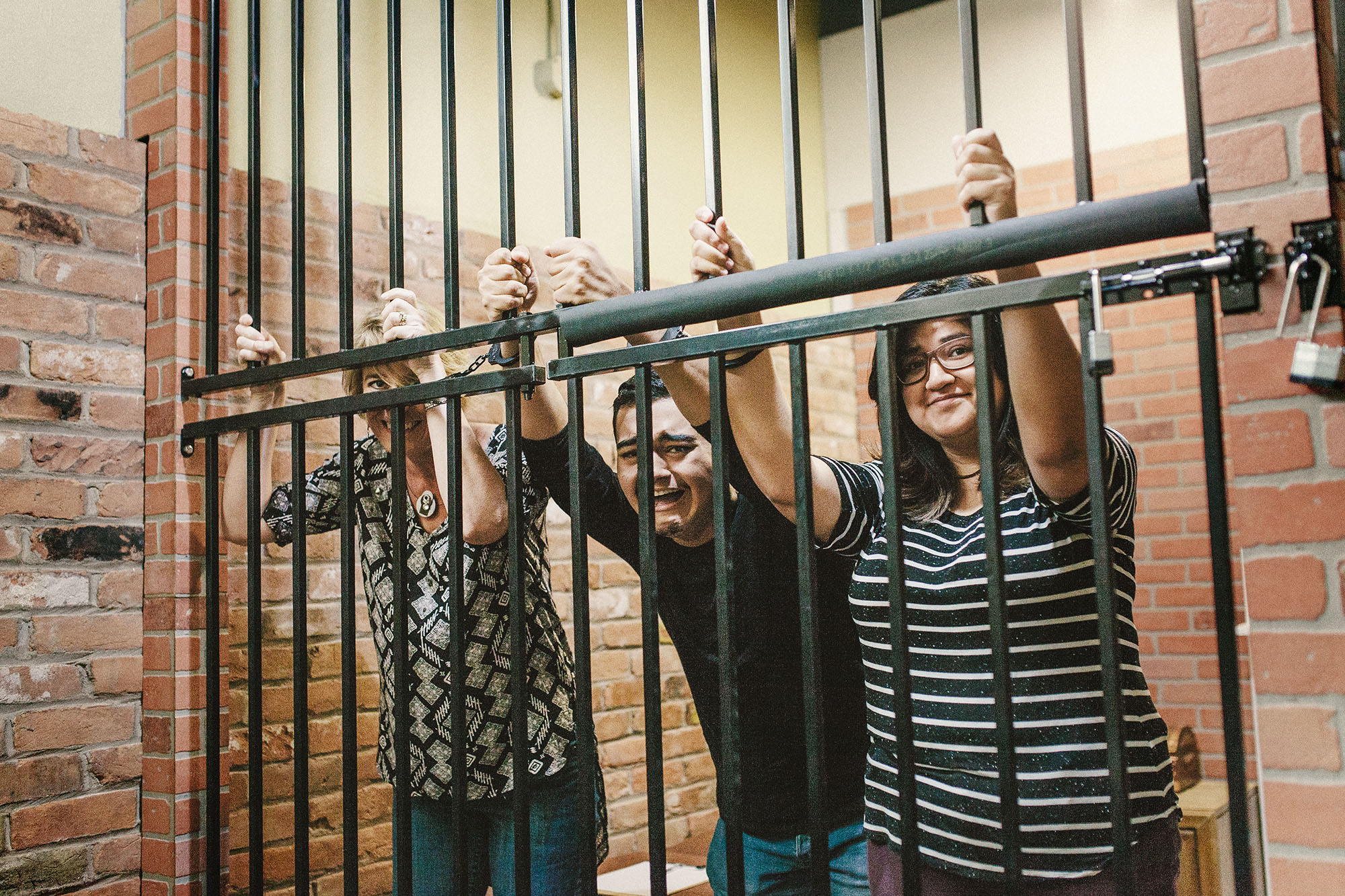 We spent the next 60 minutes (okay, it actually took us 74 minutes) digging for secret clues, finding hidden keys to un-cuff ourselves, solving puzzles to open doors, and basically tearing up our jail cells to survive.

It was intense, hilarious, brain racking, and SO MUCH FUN!

I don’t want to drop any hints on how to escape… so I’ll keep the details of our scavenger hunt to myself. I will give you a few helpful tips however, from one prisoner to another.

Here’s a photo that Mark took of us after we finally did escape from jail… 14 minutes too late. SO CLOSE! 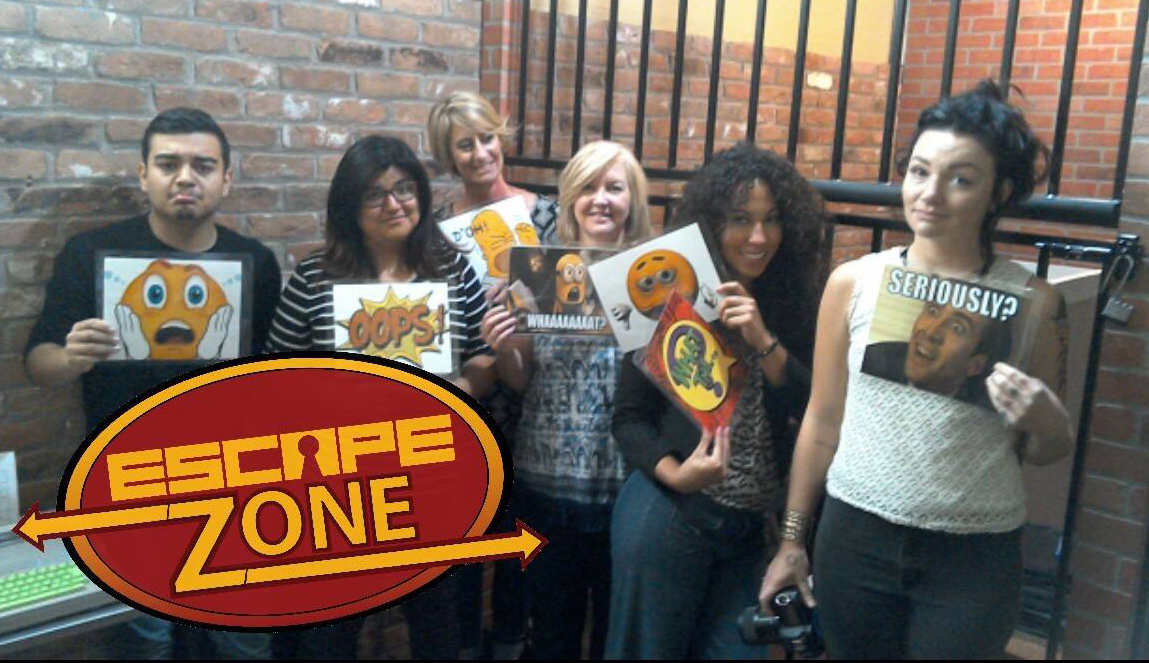 We spent the next hour over lunch talking about how amazingly intricate and truly challenging the puzzles were, laughing at how we got sidetracked a few times, and patting ourselves on the back for piecing everything together. We will definitely be going back to try the other scenario that Escape Zone offers!

Make sure you try your hand at the game room experience, and when you do, let us know how you did!